Akatsuki aims for continued growth, offering excitement through mobile gaming and live experiences as well as to realize its vision for “A Heart Driven World.”

As Akatsuki approaches its 10th anniversary in June 2020, we plan to concentrate our focus on the following priority areas. Adding to our greatest original strength in mobile games development and operations, it is increasingly important to expand globally as an “IP production company” by striving for new game experiences, IP creation, and media development. We, therefore, plan to strengthen the management and executive organization.

Changes to the Management Structure

In order to realize the above management strategy, we intend to strengthen the organization as follows.

The role of the representative director will transfer from Genki Shiota to Tetsuro Koda.
As co-founder of Akatsuki, Tetsuro Koda has consistently worked from the beginning of the cooperation with Genki Shiota, taking charge of management. Mr. Koda has solidified Akatsuki’s base, on both the business and organizational sides, serving as an engineer and product leader during Akatsuki’s founding period and driving the development of original titles “Cinderella Nine” and “Cinderella Eleven” and also establishing and maintaining the human resources and corporate administration departments. As the representative director of Akatsuki Taiwan Inc., Mr. Koda had set up this operation in 2014 and was instrumental in achieving successful global game distribution. Later, he served as head of the mobile games business and director responsible for human resources and, since 2018, he has taken the lead on both the original IP production business and Akatsuki Live Entertainment Inc., contributing significantly to business expansion.
Going forward, under the leadership of Tetsuro Koda, we aim to achieve further growth that leads Akatsuki to the next stage and realizes our vision for “A Heart Driven World.”

Akatsuki is establishing a new Executive Leadership Team (ELT) to execute business strategies, executing flexibly in priority areas and implementing decision making. ELT and the Board of Directors will act as a mutual management team responsible for maximizing long-term corporate value. ELT management role will focus on planning and execution while the Board of Directors will focus on the key decision making and corporate governance while coaching ELT. 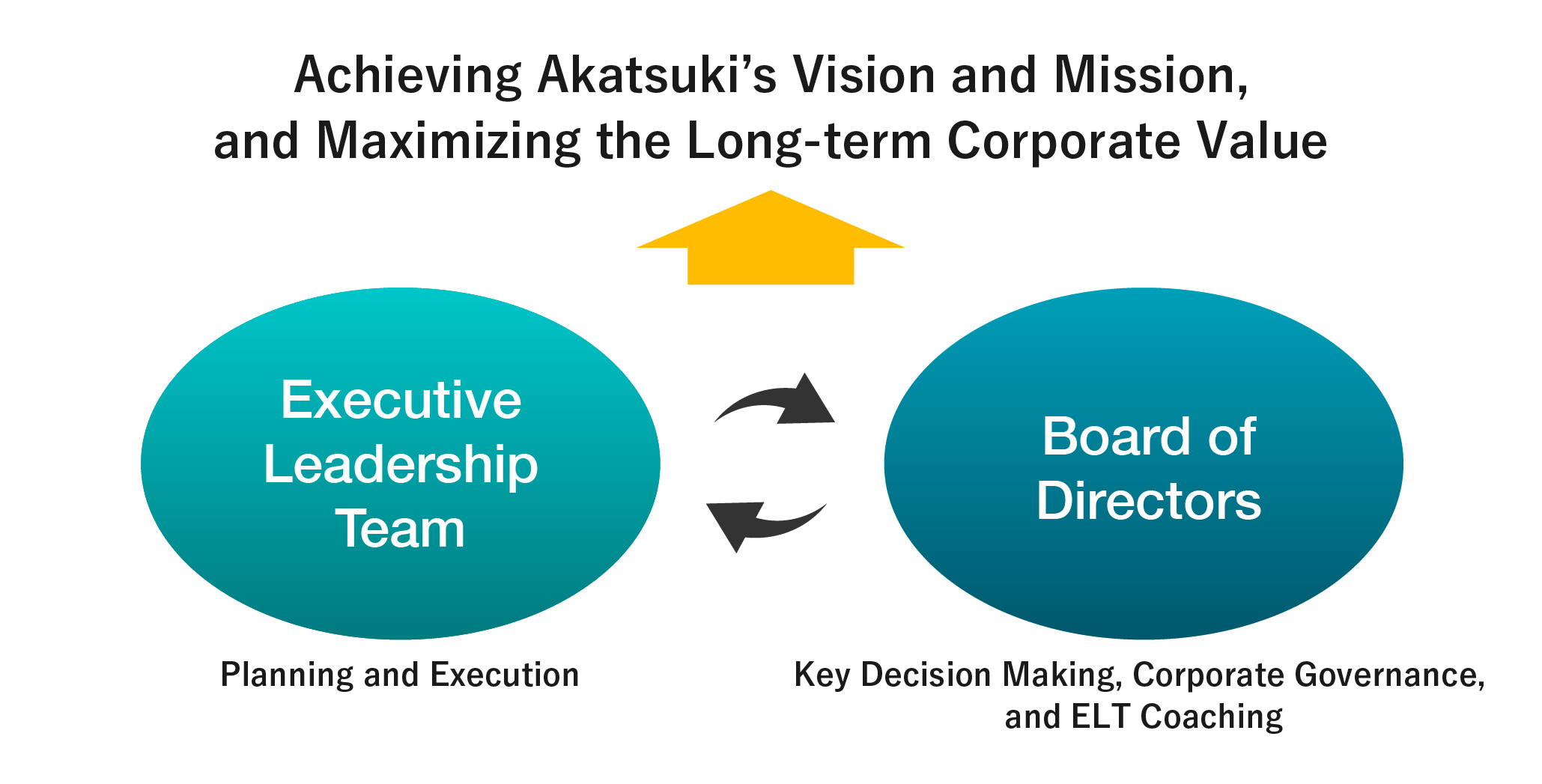 In order to further strengthen corporate governance for long-term growth, Akatsuki plans to increase the number of outside directors from one to two.

Akatsuki plans to formally adopt the changes in directors and outside directors at the General Shareholders Meeting scheduled to be held in June 2020 as well as at the subsequent Board of Directors meeting. 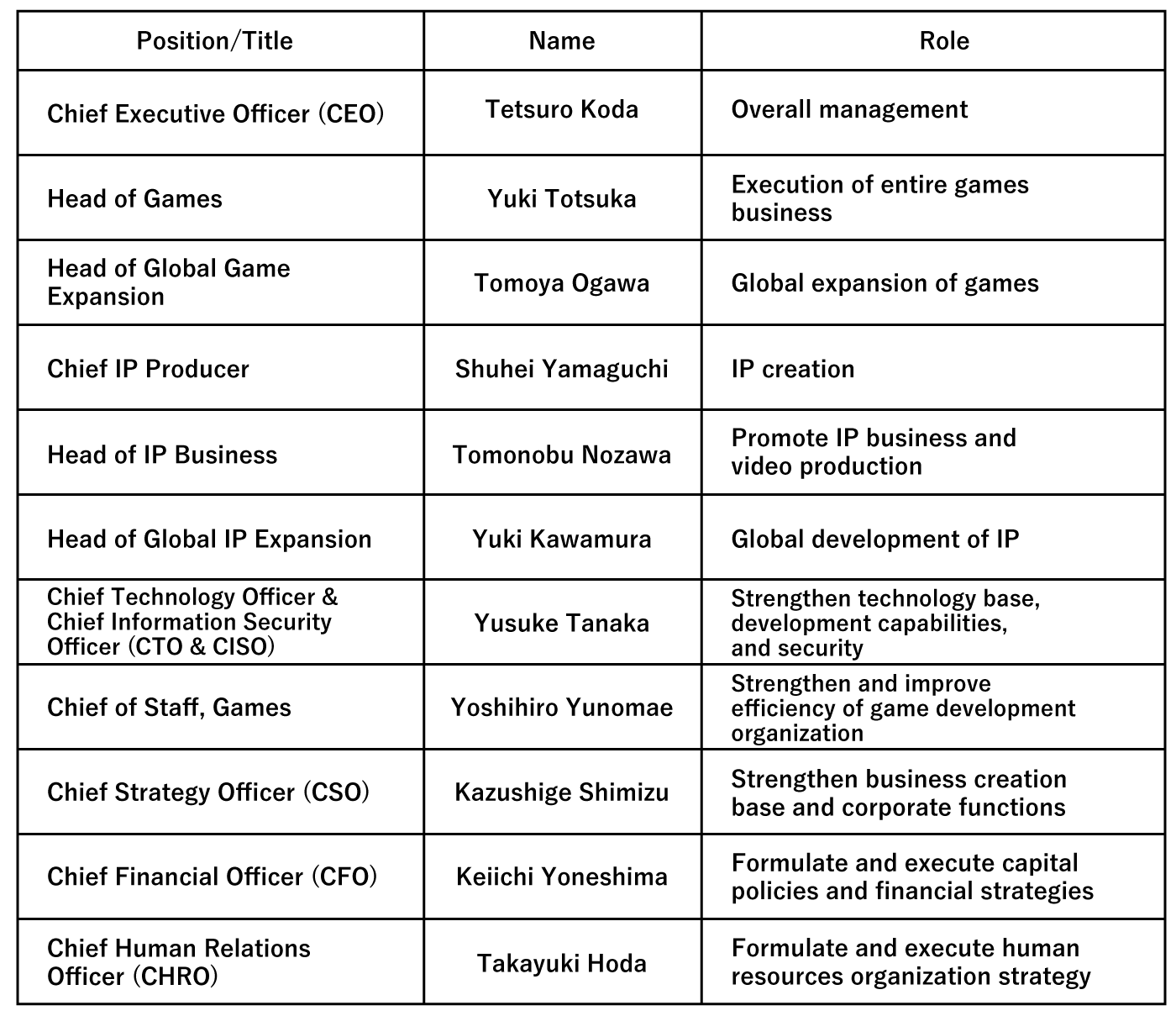 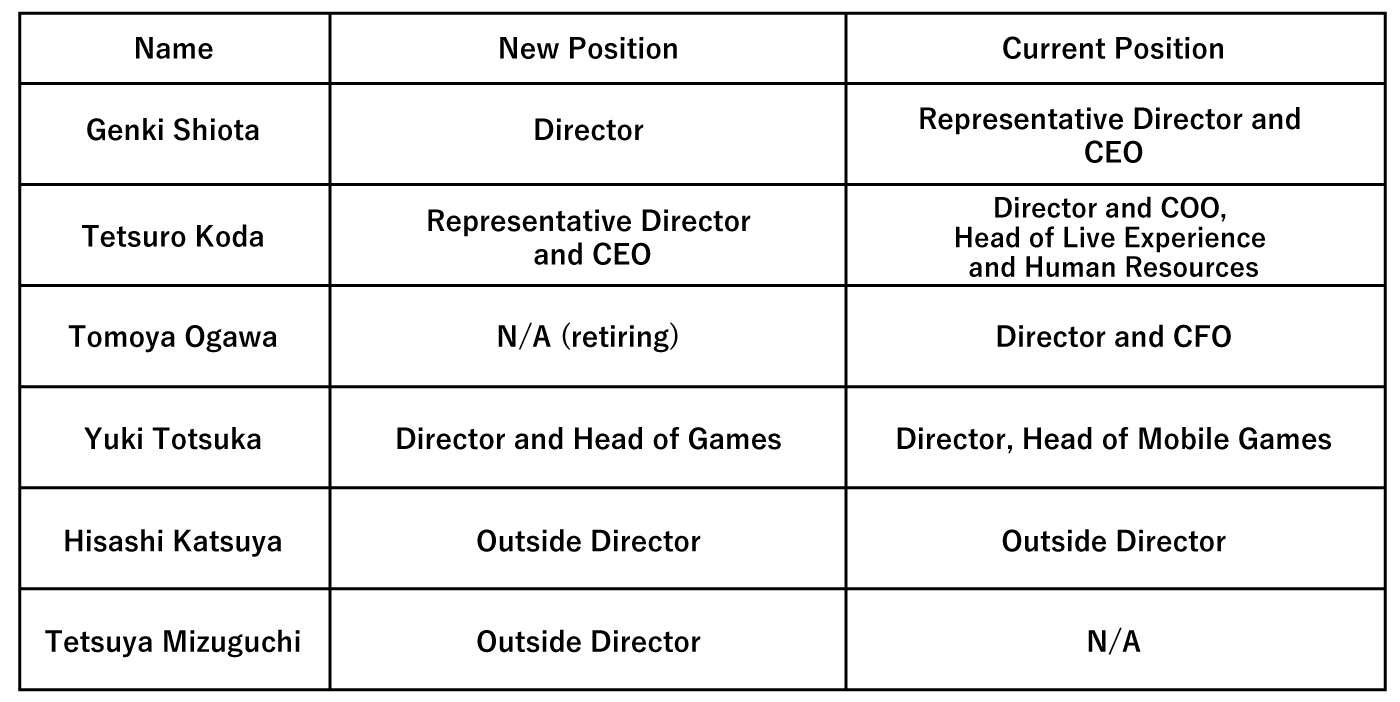 Upon retiring as representative director, Genki Shiota will assume the position of part-time director without representative rights and, from a more objective standpoint, he will become a coach for the Executive Leadership Team as well contribute to teaming across the Company.

Also, Genki Shiota plans to begin activities that will lead to the fulfillment of the Company’s vision for “A Heart Driven World” both at Akatsuki and other businesses. He will continue working with us and contributing to our network through learnings from his various activities beyond the confines of Akatsuki and by forming a connection between the Company and society.

Tetsuya Mizuguchi, the candidate for new outside director, has deep knowledge and experience in games and related businesses such as IP creation, areas that are important to the Company. Accordingly, he can provide the ELT high-level coaching that promotes the global expansion of games and growth of the IP business, while providing an outside perspective that makes management more independent.

Tetsuro Koda, CEO and Representative Director
Joined Accenture Japan Ltd. after graduating from Tsukuba College of Engineering Systems. Co-founded Akatsuki with Genki Shiota in 2010. From the beginning, drove game development as engineer and product leader. Currently serves as Director and COO, establishing a foundation for Akatsuki both in terms of business and organization. Established Taiwanese subsidiary in 2014, serving as representative director and succeeding in achieving successful global game distribution. Served as head of the mobile games business and director responsible for human resources and, since 2018, he has taken the lead of both the original IP production business and Akatsuki Live Entertainment Inc.

Yuki Totsuka, Head of Mobile Games
Born in Chiba, Japan and graduated from Sophia University, he joined the social games business of DeNA Co., Ltd. post-graduation and three years later joined Akatsuki. Since the dawn of the smartphone game market, he has worked as producer and director and led the start of multiple game projects. Appointed Operating Officer in 2018 and, in 2019, was appointed Director, Head of Games.

Tomoya Ogawa, Head of Global Game Expansion
After working for a US consulting firm and later joining a law firm, joined DeNA Co., Ltd. and worked in general business affairs as Executive Officer in the Corporate Planning Division. Joined Akatsuki in 2014 and was appointed Director and CFO, engaged in overall corporate affairs and oversaw investments.

Shuhei Yamaguchi, Chief IP Producer
Joined a big-name game developer as a new graduate and was active as a core member involved in a nationally recognized RPG series. Later, gained experience as a director in social gaming and joined Akatsuki in 2014. Worked as the producer of multiple IP titles that have recorded high sales, including “August Cinderella Nine” original IP title of Akatsuki. Since 2018, working as Chief Producer at Akatsuki’s newly created Production & Innovation (PI) Laboratory.

Tomonobu Nozawa, Head of IP Business
Joined Akatsuki in 2014 after graduating from Keio University Faculty of Science and Technology. Worked as producer and director for multiple new game titles and currently the Deputy General Manager of the Games Business.

Yuki Kawamura, Head of Global IP Expansion
After working for US consulting firms in Tokyo and Singapore, joined Netflix in 2015 and participated in the Japan launch working on content planning and analysis. Joined Akatsuki in 2018 and engaged in investment in India. Working in parallel on overseas development of IP originating from Japan.

Yusuke Tanaka, CTO & CISO (Chief Technology Officer and Chief Information Security Officer)
Joined Akatsuki in 2012 after working for a large-scale chemical company as a systems integrator and has been engaged in the development and operation of core systems. Involved in the development of nearly all game titles, was appointed CTO in 2014. Leading efforts to raise Akatsuki’s technological capabilities created the culture of productivity for the engineering group, developed the technology base for game production, enhanced company-wide systems security, and improved information systems.

Yoshihiro Yunomae, Chief of Staff, Games
Joined Hitachi, Ltd. (Yokohama Research Laboratory) as a new graduate and worked on upstream Linux kernel processes. Joined Akatsuki in 2014 as a client engineer. Promoted to VP of Engineering in April of 2017, focused on building and managing the engineering organization.

Genki Shiota, Director
BS in Electronic Engineering and Computer Science from Yokohama National University, MBA from Hitotsubashi University. Joined DeNA Co., Ltd. Co-founded Akatsuki in June 2010 together with Tetsuro Koda. Public listing of Akatsuki on TSE Mothers in 2016, transferring to TSE 1st Section in 2017. Lead the growth of Akatsuki under the vision for “A Heart Driven World” and made significant contributions to business performance. Authored book titled “Heart Driven, the Power of Placing Value on Intangibles” (published by Gentosha).

Hisashi Katsuya, Outside Director
Representative and painter, Team♡KATSUYA. Worked at IBM Japan for 25 years. In 2000, appointed Partner and Japan Representative for IMB Venture Capital Group and acted as Project Manager for Human Resource Development at METI’s IPA agency. He began working independently with his spouse in August 2010. Became mentor and supporter of Akatsuki during its 2nd year after foundation. Remains active as a business producer in various capacities: Visiting Professor at Kenichi Ohmae Graduate School of Business, Part-time Lecturer at Toyama Prefectural University and Sophia University, Advisor on Community Informatics to the Ministry of Internal Affairs and Communications, Director at Fukuoka Ruby and Software Industry Promotion Committee.